On the South Pacific island of Rarotonga is an elder named Pa, who hikes barefoot across the island ever day, famously dropping seeds of wisdom. Among those that sprout in my memory, are his thoughts about the healing power of nature.    “If someone is not well, physically or mentally, just put them in a natural space, and leave them alone for 15 minutes,” he told me.   I wonder if this is what the founders of Parks Canada were thinking when they launched the world’s first national parks service, which continues to govern our 46 national parks and reserves. Anyone who spends time in these vast, open spaces is bound to feel something: A sensory appreciation for the natural beauty; achievement for a physical pursuit like hiking, climbing or biking; a re-connection to the forests, mountains, rivers and plains that existed long before cities, smartphones and email.

A born and raised urbanite, camping and hiking was never as natural for me as visiting a mall or museum. In South Africa, we would spend vacations in national parks, staying in self-catered bungalows, enjoying the wilderness of the bush. But the insects terrified me, as did snakes, spiders and lions sometimes roaring in the distance.   Nature seemed harsh and dangerous. I liked the freedom of the outdoors, but not the monsters waiting in the shadows, waiting to pounce.  Then three things happened: I grew up, moved to Canada, and embarked on the 75km West Coast Trail in Vancouver Island’s Pacific Rim National Park.

It was my first real hike, stretching over a week across terrain known to challenge even the most experienced hikers. While I had backpacked around the world, I never carried my pack for 8 hours a day across slippery logs, up 25m wooden ladders, and along muddy beaches. Taking everything in and everything out, my pack was especially heavy, as if it contained every guilty sin on the planet. Every year, around 100 hikers are evacuated from the trail, mostly due to sprains, injuries, and hypothermia from the notorious West Coast weather. It often rains for weeks, turning the path into a difficult, mucky quagmire.   Yet the weather doesn’t stop hikers coming from around the world, and it wasn’t going to stop me. 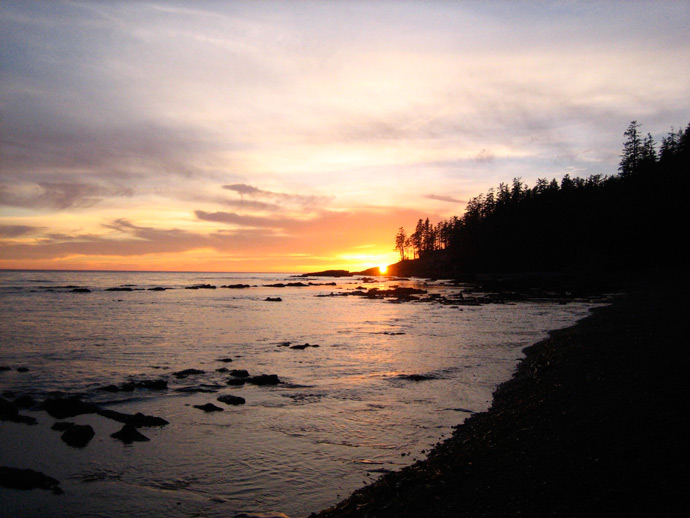 Over the next seven days, I lunched on GORP (granola, oatmeal, raisins, peanuts), swam in ice-cold streams, built huge driftwood bonfires on the beach, and engaged in hearty banter with fellow hikers. The rain blessedly held up, and the beach sand hardened so it felt like I was walking on Oreo cookies.   Magical sunsets rewarded every day’s hike, which got easier as meal loads lightened and muscles got stronger. The cold water of the Pacific flushed tidal pools full of bright anemones, purple starfish, crabs and urchins. A sense of camaraderie ran up and down the trail, uniting friends and strangers.  Muscles were stiff and sore, and truth be told I did enhance nature’s healing power with several extra-strength painkillers. But as I strode past the trailhead Bamfield, I felt baptized by the power of the challenge, the friendship, and the pristine coastal forest of Vancouver Island.   Clean and excited hikers were just beginning their journey.   I wished them luck, because they really would need it.

Since then, I’ve been lucky enough to explore many national parks. The view of the Rockies, from Banff National Park – Canada’s oldest – and nearby Jasper National Park, has long been a powerful sales tool for foreign travel agents.    On the east coast, I can confirm that walking along the Greenwich Dune Trail in Prince Edward Island National Park at sunset is a sure-fire recipe for goosebumps. In Dinosaur National Park, ancient fossils still poke above the soil of the striking Albertan Badlands. National Geographic has called the 640km coastline of BC’s Gwaii Haanas National Park Reserve the Best National Park in North America. You can horse-ride among free-roaming bison in Saskatchewan’s Prince Albert National Park, sail up the inland fjord of Gros Morne, hike in New Brunswick’s Fundy National Park, channel Scotland in Nova Scotia’s Cape Breton Highlands and lose yourself in Canada’s largest national park, Wood Buffalo, to name but a few. Camping in Ivvavik National Park was extraordinary. Some Canadians might forget the effect these massive spaces have on us immigrants.

Of course, you don’t have to travel to these rock star national parks. Chances are there’s a national or provincial park nearby you.   This weekend, if you’re feeling a little stressed, consider taking Pa’s advice: Surround yourself with nature, breathe, and see what happens.