Skating on the Rideau Canal

I’m having coffee with some local friends in Ottawa, and one of the guys at the table starts talking about the Rideau Canal. He’s not harping on the fact that it is the “best preserved slackwater canal in North America, demonstrating the use of European technology on a large scale.” We both don’t know exactly what that means, but that’s the quote from UNESCO’s website recognizing the canal as a World Heritage Site. It’s way cooler to think of this 202 kilometre waterway as the very reason why Canada is not part of the United States, since this military-built engineering achievement allowed the British to defend the country against attacking Americans. Some historians believe if the canal didn’t exist, neither might Canada. Cooler still is the fact that every winter, the Rideau turns into the world’s largest outdoor skating rink. At 7.8 kilometres, the skateable section that cuts through Ottawa is equivalent to 90 Olympic-sized Hockey Rinks. The Rideau used to be the world’s biggest skateable rink, period, until Winnipeg took the title with its 8.54-kilometre-long Assiniboine River Trail. Now there’s an upstart in Invermere British Columbia hoping to usurp both with its Whiteways Trail system on Lake Windermere. Ottawa’s long, Winnipeg’s wide. When it comes to the ego of a city, size does matter. Back to the coffee table in Ottawa. It’s a frosty -12°C outside, and the beans taste particularly good.
“You know, the Rideau, it’s a magical place,” says my friend. “Sometimes, at midnight, I put on my speed skates, crank some music on my iPod, and I just go for it. I mean, I just skate fast and smooth and it feels like I’m flying. Nothing beats that feeling, nothing.”

He tells like he feels it, with deep respect and awe. His experience axel jumps over the historical significance of the Rideau. It spirals around the quirky fact that Ottawans skate to work, briefcases in hand. It makes my hair stand up and my heart quicken. I want to know that feeling. That evening, I walk to the Kilometre Zero, not far from the steps of Parliament. I only have one night to chase the experience, but there are some challenges to overcome. The fragrance of fresh-fried Beaver Tails wafts in the air, demanding a detour. Exquisite ice sculptures on display from the annual Winterlude Festival prove an additional distraction. I don’t even have skates, but to the rescue are skate rental booths on the skateway. Everything is set, when the final two hurdles present themselves:

Ottawa had enjoyed an unseasonably warm winter, and the result was skateway cracked and scarred, pockmarked and as uneven as a politician’s ethics. The locals know when to steer clear, but poor tourists are discovering that ice is very hard, and an outdoor canal differs greatly from a smooth indoor skating rink. An ambulance flashes and some helpful volunteers cart off a skater. On the way, they tell me I’m mad to even think about being on the ice. The fact that I can barely stand up on ice skates (cut the immigrant a break!) isn’t helping. I close my eyes, take a deep breath, and imagine myself skating at speed, under the bright stars, perhaps an artist like Ottawa’s Kathleen Edwards dreamily cooing away on my headphones. Then I slip, land hard on my butt, and quickly decide the only sane place for a tourist in Ottawa right now is a warm pub in the Byward Market District. Which is exactly where I go. I never did quite get to skate the Rideau in all its glory. But that shouldn’t stop us from adding it to The Great Canadian Bucket List. 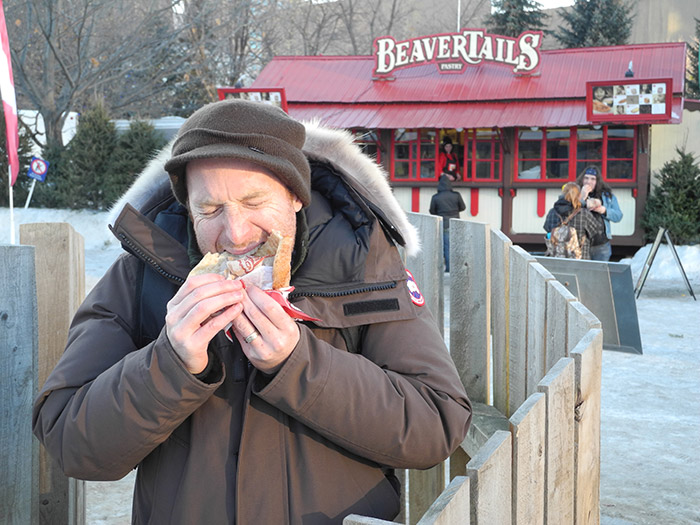