Cops and Robbers in Moose Jaw 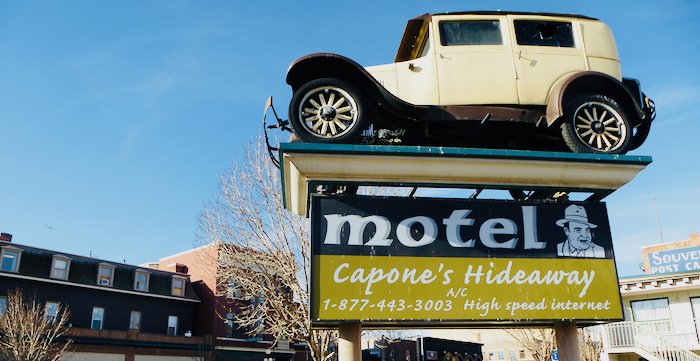 Visiting Saskatchewan can feel like a game of cops and robbers.   We visited outlaw caves in Big Muddy, put on the Red Serge at the RCMP Depot, and now we’ve taken a 45-minute drive west of Regina to Moose Jaw in order to get our gangster on, capiche? For most of the century, Moose Jaw authorities denied the existence of an underground labyrinth beneath the buildings on Main Street.   After all, nobody is fond of revealing skeletons in closets located in secret rooms. Unless, of course, those skeletons can intrigue tourists, in which case, bring out the bone polish! 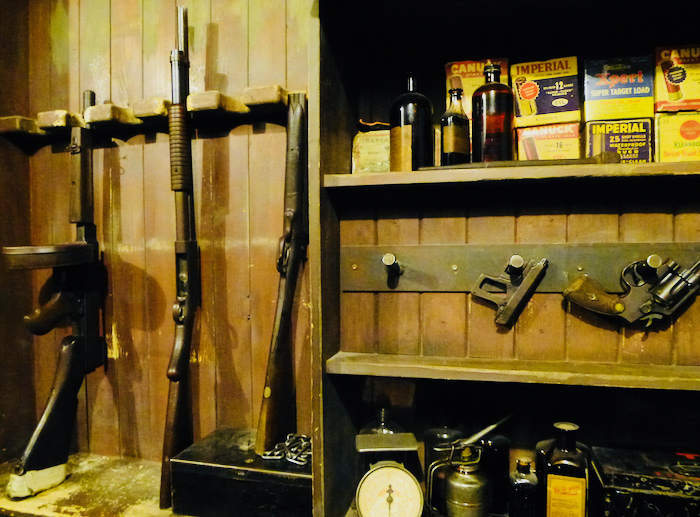 The Tunnels of Moose Jaw recreates the city’s infamous history with two, fifty-minute underground tours exploring Chinese Immigration in the early twentieth century (the Passage to Fortune) and the role of Moose Jaw during Prohibition (The Chicago Connection). Renovated to recall both periods, re-enactors lead us through passageways and hidden rooms, explaining how the tunnels were used – first as access corridors for steam engineers, then as a safe haven for Chinese migrants fearing for their safety, and finally by bootleggers and gangsters.   Although there’s no physical evidence he ever visited “Chicago North,” Al Capone’s ghost is everywhere. Gangster history of that era is soaked in rum, myth and hearsay.   What is known for certain is that Moose Jaw was an important distribution centre for rumrunners smuggling booze into the United States on CPR’s Soo Line. During this period, local law consisted of a Chief of Police named Walter P. Johnson, a man firmly in the pocket of the gangsters. In exchange for peace and envelopes stuffed with cash, Capone’s men essentially had the run of the town, operating gambling, booze and prostitution rings in the refashioned tunnels, safe from prying eyes.     When prohibition ended, the abandoned tunnels were either denied or forgotten, until re-opening in 2000 as a lively historical tourist attraction.

Entering on Main Street, old newspaper clippings and exhibits immediately set the tone for an underground time warp into the city’s seedy past. Two re-enactors lead us across the street where the tour will begin. We enter a saloon to the sounds of honky-tonk piano.   Our guide Miss Fanny, a vivacious lady of dubious profession, sets the context. It is 1927, an era of temperance. Alcohol has been outlawed in the United States, creating rich opportunities for Canadian liquor operations close to the border. Speakeasies are doing a roaring trade, but police and FBI raids permeate the air along with cheap perfume and cotton-wool clouds of cigarette smoke. Even with the law in their pocket, the tunnels of Moose Jaw are perfect for gangsters on the lam. We walk down a narrow staircase, Miss Fanny passing us off to a young Wise Guy with a thick “Joisey” accent. He shows us where the boys gambled, operated radio communications, hoarded booze and kept their Thomson sub-machine guns, all the while reminding us to “forgeddabout it!” It’s fun and hammy, and the entire time I’m thinking, “really, this is happening each day beneath the streets of downtown Moose Jaw?” By the end of the tour, I’m pulling my hat low and my collar up.   Walking onto Main Street, there’s a jarring sense of returning to the present, to our own era of law and order.   Although the truth was probably less glamorous, Moose Jaw’s gangster history smuggles itself onto The Great Canadian Bucket List. No questions about it, capiche? 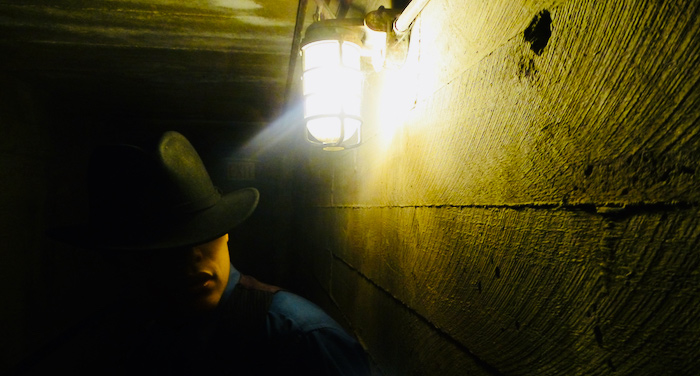