The Strong Arm of Canada

The Great Canadian Bucket List is more than just the activities and destinations that make Canada the country it is. It is also about people.  Every once in a while, I’m going to introduce you to a remarkable individual who embodies the spirit of the nation, someone who forms an inspirational thread in our cultural fabric.   Kicking things off is a guy who believes that anything is possible, but unlike so many of us who believe the same, he decided to actually prove it. 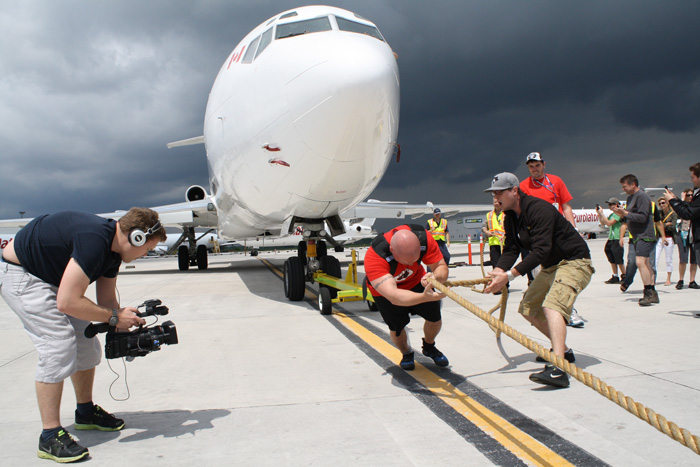 The Strong Arm of Canada

Every kid has fantasized, at some point, about being a superhero. I wanted to shoot energy blasts from my hands (like Iron Man), fly (like Superman) and manipulate physical matter with my mind (like Professor X). If Ryan Lapadat could pick one super power, it would be strength, and like his favourite superheroes, he would use that strength to help those in need. He was obsessed with comic books, but unlike fanboys in love with their plastic-wrapped collections, Ryan hit the gym to build his bulk. That’s what got him into powerlifting, and that’s what started winning him titles. Yet every superhero needs an origin story, and merely wanting to be a superhero isn’t it. Much like Batman, Ryan’s story begins with a tragedy.

“A close friend of mine, only 25 years-old, got sick. He complained of stomach pains, went into hospital, and two days later, he died of [cancer]. His six year-old son called me ‘Uncle Six Pack.” It was a life-changing moment. It didn’t matter how fit he was, or what a good guy he was. He was an innocent victim. I had built up my strength, now it was time to help people with it.”

Ryan contacted Toronto’s SickKids Hospital, and told them he would raise money by pulling a 12,000 kilogram bus.

“They didn’t know who I was, I hadn’t broken any records back then. They didn’t think I could do it. Hell, my own parents didn’t think I could do it. But I wanted to show those kids in hospital that anything is possible, I wanted to give them, and their parents, something to believe in. When you’re lost, you look for signs, and when you’re losing hope, you look for inspiration. A 97 kilogram guy pulling a bus, or plane? Kids aren’t jaded like adults. If I can pull these things off, against tremendous odds, everybody starts re-thinking what is possible.”

Ryan pulled the bus over one hundred metres. Then he pulled a passenger jet. He went on to break four Guinness World Strength Records, bending frying pans with his hands, flipping cars, and raising money at charity events he’d produce around the province.

“When I started training, I remember getting stronger, but not knowing how to apply it. Then I read in a local newspaper about a Canadian guy named Alex Drolc winning the Arnold Classic Powerlifting Championships, named after Schwarzenegger. Alex broke Schwarzenegger’s world record, and Arnold was in the audience! Alex went to my gym in Guelph, and this guy, he’s a real beast of a man. I was so intimidated, but I knew I had to approach him. They say that unless you’re a fan of disappointment, you should never meet your idols. Well, Alex is one of the most physically powerful men in the world. He could have been all ego, but instead he was welcoming and supportive. Every expectation I had of him, he lived up to. He’s been my personal mentor ever since. A kind, humble friendly guy – as Canadian as any personal hero can be.”

“I love this story. When Donovan Bailey beat Michael Johnson to win the 100-metre Gold Medal at the 1996 Summer Olympics, he became the fastest man in the world. That’s the de facto title for the winner of the 100 metre race. Then Michael Johnson won the 200-metre race, and media in the States called Johnson the world’s fastest man. To settle the dispute, a 150-metre exhibition race was set up between Bailey and Johnson in Toronto. There was so much hype about it. What’s interesting is that when Johnson came up to Canada, he thought everyone would be polite and friendly, but he was shocked at how much support there was for Bailey. 30,000 people went nuts for the local hero. When Canada rallies behind you, the whole country rallies behind you. You don’t get lost in the shuffle like in the US. Canadians really get behind their champions, and I feel that support when I compete internationally. It means a lot in competition, and it means a lot when I have to singlehandedly pull a Boeing 727.”

Bailey won the race, with Johnson pulling up after 110m with a quad injury. Commentators say Bailey was ahead at the curve, beating Johnson before the injury. As for the quad injury, I guess there was too much tension.

What’s the most surprising aspect about doing what you do?

“When I show up for an event, everyone expects me to be much bigger. They’re immediately sceptical. I mean, I look somewhat average, certainly a lot smaller than your typical strongman. It all helps drives home my message that anything is possible. I’m only 5’9, 215 lbs, and you can measure that, but you can can’t measure heart and will. Kids get it immediately. But I love watching adults lose their scepticism, when they also start screaming and cheering like the kids. I think that when we see someone doing something incredible, it reminds us what it was like to feel, and believe, like a kid.”

What are you thoughts on the future of Canada?

“For a long time, we’ve had an inferiority complex in this country. When it comes to the Olympics and other events, we just wouldn’t expect ourselves to achieve. Then we started training programs, started winning, and now we push ourselves harder. I believe the North is stronger than ever, and Canadians are starting to believe it too. We’re not losing our humble identity, but we’re definitely getting more confident. Our nation is getting stronger. The world is noticing, and not just professional strongmen.”