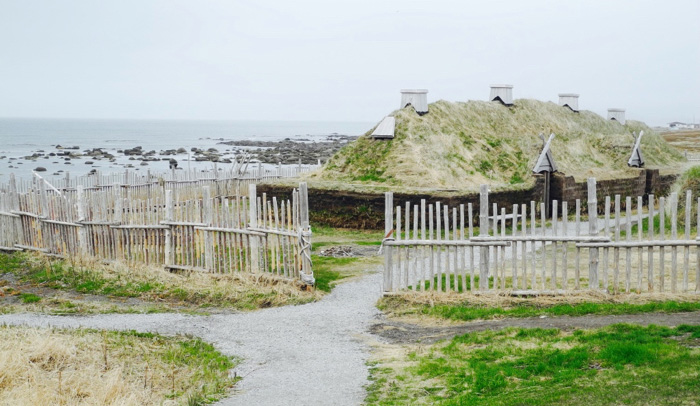 History is written by victors, conquering their version of events into hard fact.  Yet every once in a while, the rug gets pulled up from under us, and we’re forced to re-evaluate the past.   For example:  Every kid in America knows that Christopher Columbus was the first European to discover the New World in 1492.Well, thanks to a couple of tenacious Norwegians and a little outpost on the northern tip of Newfoundland, the textbooks have been revised.  The Icelandic Sagas, dating back to the 10th and 11th centuries, told stories of “Vinland”, a land of wild grapes, located in the west beyond Iceland and Greenland.   The sagas told how Vinland was visited and settled by Vikings, although there was never any proof to back this up.  Some theories believe that prior to Columbus, the Chinese traded with indigenous Americans, and even Irish seamen traded on the American coast. A lack of physical evidence sinks as many ancient theories as the Atlantic sinks boats.  The fact that there exists a Central and South American demi-god who sailed in from the ocean – tall, white, red-headed and bearded – certainly suggests European influence in the Americas in ages past. Yet without proof, the historical record of Columbus held true.

In the 1960’s, Norwegian adventurer Helge Ingstad and his archaeologist wife Anne Stine Ingstad combed the eastern coast of North America searching for physical evidence of Norse settlement.  After many red herrings along a coast rich with cod, they happened upon a small, isolated fishing community called L’anse Aux Meadows.  When they described to locals what they were looking for, they were surprised to be led to a series of raised mounds.  The locals had attributed them to indigenous people, and the kids who played on them called them the “Indian Camps”.   Over the next eight years, the Ingstad’s excavations uncovered undeniable proof that this was in fact a Norse settlement dating back to 1000 AD – almost five hundred years before Columbus.  Working in oft-brutal weather conditions, they discovered eight complete house sites, and the remains of a ninth.   Parks Canada took over in the 1970’s, and when UNESCO awarded its first World Heritage Site to Canada in 1978, the archaeological and historical significance of L’anse Aux Meadows was selected.
“Ya know, you definitely have some Viking in ya,” says the colourful site interpreter, Clayton Colborne.  With my blue eyes and red-tinged beard, it certainly suggests some interesting breeding in my European Jewish heritage.  Clayton was born and raised in the tiny community of L’Anse aux Meadows (population 25) and used to play on the archeological site as a kid.  Today, his bearded, bright-eyed face adorns the Parks Canada pamphlet inside their modern Visitor Centre.  It’s a grey, foggy day, but the drive here from Gros Morne National Park was pretty enough, dotted with fishing communities.  The landscape looks like tundra, but Clayton tells me that’s only because all the trees close to the road have been cut down.  Homes still need a good supply of wood to make it through the long hard winter, and the nearest tree usually does the trick.  Despite the solid tourism traffic, Clayton reckons the actual town of L’anse Aux Meadows –  dating back to the mid-19th century when the French ruled the shoreline – will probably disappear.   All the young folk have moved on.

After learning about Norse migration and other information from the Visitor Centre’s exhibits, we walk along a wooden boardwalk into the field, passing beneath a striking sculpture called The Meeting of Two Worlds.
“Full circle, ya know,” explains Clayton. “When the Norse arrived and interacted with the locals, it was the first time two branches of humanity met in 100,000 years!”
All that remains of the excavations themselves are mounds, grassed over like burial plots. The Ingstad’s discovered many artifacts confirming Norse settlement, including a bone knitting needle, a bronze fastening pin, and nails made of a type of iron common in the British Isles.  Further along, Parks Canada have reconstructed a Norse hall, hut and house out of sod as they would have looked one thousand years ago.   A re-enactor shares tales around a fire inside, and it isn’t hard to imagine the cold, brutal conditions these early settlers had to endure. Perhaps this explains why the settlement was abandoned after a decade’s use, the houses burned down. The Norse left, never to return again.  Perhaps this was only a way-station en-route to a larger yet-discovered community, the Vinland so-named because of the wild grapes that grew there.

Perhaps it was abandoned because of a hostile relationship with the natives, since we can agree Vikings were not the most peace loving of people.   It’s a mystery that remains to be solved.   In any event, the only known evidence of European settlement in North America aged into obscurity, until a Spaniard arrived hundreds of years later and re-introduced Europe to the “New World”.    In addition to experiencing the beauty of a stark landscape, and my new understanding of life from another millennia, I depart L’anse Aux Meadows enriched with Clayton’s stories, and the satisfying feeling that a tiny Canadian village has proudly rewritten North American history. 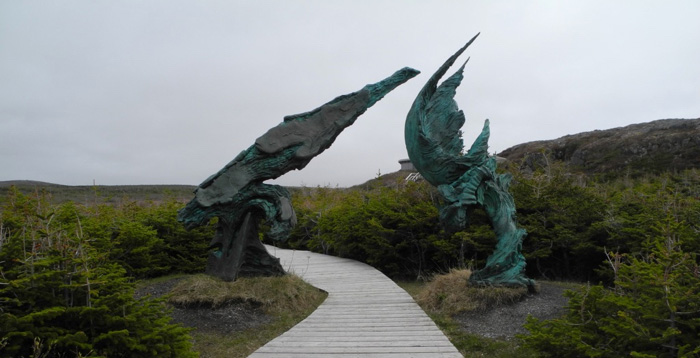