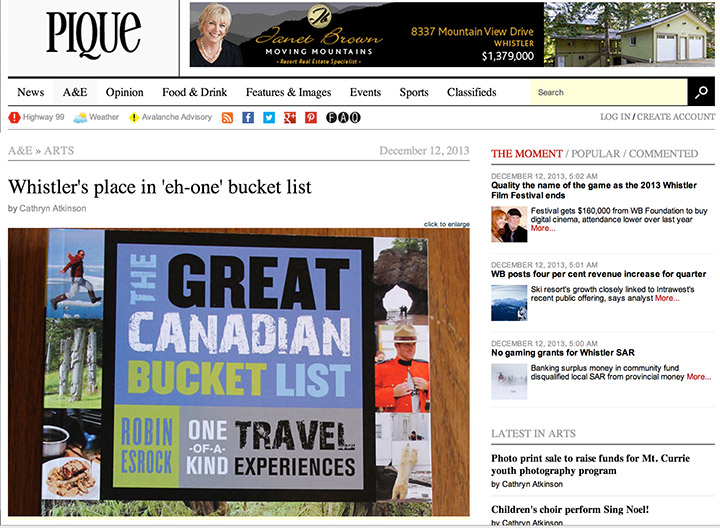 If there is one country that deserves a bucket list of amazing places we must visit and wonderful experiences we must have, it’s Canada, and author Robin Esrock has finally given us one.

The Vancouver-based travel writer’s book The Great Canadian Bucket List: One of a Kind Travel Experienceshas just come out and – guess what? – Whistler figures and so does Squamish.

But before that, let’s get into the general Canadian vibe of this great nation. What is useful and rather excellent about the book is that each province and territory is well represented, equally. Readers get a real sense of the variety of this huge country.

Unlike other travel books on Canada that only seem to know of the existence of Toronto and B.C., with the Calgary Stampede, Peggy’s Cove and Quebec City thrown in for good measure, The Great Canadian Bucket List tries harder. Esrock shows how you can star gaze in a Dark Sky Preserve in Saskatchewan, see thousands (and thousands) of snakes in their Manitoba dens and where you can drink a potato smoothie in New Brunswick.

The book gets the backing of Jon Montgomery, honourary Whistlerite beer-pitcher drinker, skeleton gold medallist in the 2010 Olympics and the host of The Amazing Race Canada.  His endorsement describes the book as being “what the giant sequoia is to trees and Zdeno Chara is to the NHL… a BIG game changer.”

As the number one Canadian ski resort, Whistler gets its own section, of course, along with a list of the Top 10 resorts in the country. The operative word appears to be “epic.” Epic terrain. Epic Snow. Epic dining.

Esrock notes Whistler’s 8,100 acres (3,277 hectares) of skiable terrain, 50 per cent more terrain than any other resort in North America. He speaks of the Peak 2 Peak’s glass-bottom gondolas with a certain amount of remembered nervousness.

But ultimately there are no complaints. In fact, he says “The entire experience has the tendency to make other resorts pale in comparison,” listing the nightlife, festivals, food, backcountry and Nordic offerings as the reasons why.  Send the book to your friends who have never quite got around to visiting here.

South on the Sea to Sky Highway is the Stawamus Chief at Squamish. It features in the Great Canadian Bucket List, too, as a great hike. Talking about the Chief, Esrock factors in the stunning views of Howe Sound and the well-maintained trail. The Sea to Sky Gondola, which opens in 2014, also gets a mention.