From the Sault Star 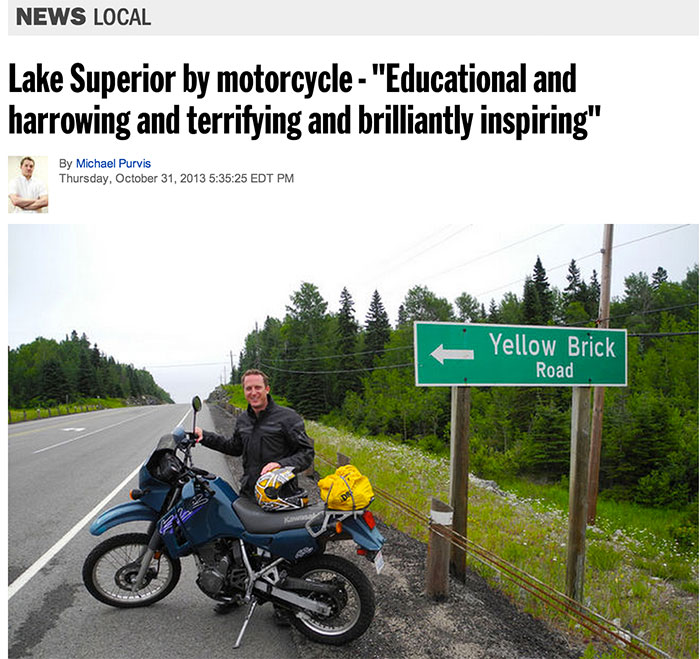 When Robin Esrock set out to catalogue the best tourist experiences in Canada, he knew he had to include an epic motorcycle trip. His route of choice? The north shore of Lake Superior from Thunder Bay to Sault Ste. Marie.

“Whether you do it by bike or by car I think it’s a great road trip to do,” said Esrock, a travel columnist, television host and author. There was, however, one hitch. Esrock didn’t actually have a motorcycle licence when he planned the trip  “I did get it, but I didn’t really know how to ride a motorbike,” said Esrock. “It was both educational and harrowing and terrifying and brilliantly inspiring at the same time.”   Esrock will be back in Sault Ste. Marie on Sunday at noon for a book signing and presentation on his new book at Coles in Cambrian Mall.  His book took him to more than 115 locations over the last two years. He embarked on the motorcycle trip during the summer of 2012, setting out from the lakehead with a rented bike and a mechanic to guide him.

“When I arrived in the Sault I was so relieved I survived it because ‘Guy gets killed researching book about things to do before you die’ is such a typical newspaper headline,” laughed Esrock. “It was freaking me out. I kept picturing it the whole time.”   Esrock, a native of South Africa who came to Canada in 1999, has been travelling the world as a writer and television host for the last eight years. A couple years ago, he said he realized he hadn’t seen all that much of Canada and wrote a column for the Globe and Mail about what he thought were the country’s must-see spots.He said he was surprised when a publisher contacted him about turning it into a book.   “The first thing I thought was surely somebody’s done this before – a book about the best things to do in Canada that’s not a guidebook,” said Esrock. “Nobody had, and I think that really speaks to Canadians’ modesty.”

Esrock’s book is not meant as a guidebook. Rather, it purports to be a definitive list of the best there is to experience in Canada’s 10 provinces and three territories, as well as inspiration for others to follow in Esrock’s footsteps.“That’s what the country was lacking – someone to say, what are the best things to do, why are they the best things to do,” said Esrock.

It includes 115 experiences spanning a variety of interests, including hiking the tundra under Nunavut’s midnight sun, a search for the best smoked-meat sandwich in Montreal and ziplining in New Brunswick.Esrock said he chose experiences that people could realistically do themselves with a little planning.   A companion website – Canadianbucketlist.com – gives readers the details they need to go out and see what Esrock has seen.

Esrock’s career as a travel writer started after he was hit by a car while riding to work on a scooter in Vancouver.  “It broke my kneecap and this was, looking back, the best thing that ever happened to me,” said Esrock. “It was a wake-up call. It was like ‘Holy crap! There a lot of things to do out there.’ There are so many things to see and do out there and that could have been it, right there.”

He quit his desk job and sold his belonging. He got a $20,000 cheque from the insurance company – “Just enough to make me think I could go backpacking around the world for a year.”  He toured 24 countries over the next 12 months, documenting his travels both on his own blog and in weekly columns for the Vancouver Sun. He said he started submitting stories to other papers around the world and “things just kind of snowballed.”

Esrock later developed, wrote and produced the half-hour tv show World Travels, which saw him and co-host Julia Dimon travel to 36 countries over three years  He said he spends about half the year travelling and finds it to be rewarding.