Things to do in Canada before you’re dead

Before he went to a game for his Great Canadian Bucket List, Robin Esrock thought Roughriders was a brand of condom. 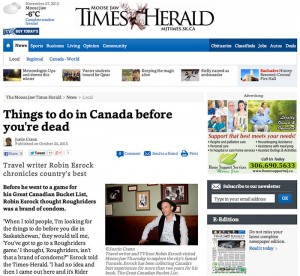 “When I told people, ‘I’m looking for the things to do before you die in Saskatchewan,’ they would tell me, ‘You’ve got to go to a Roughriders game.’ I thought, ‘Roughriders, isn’t that a brand of condoms?'” Esrock told the Times-Herald. “I had no idea and then I came out here and it’s Rider Nation and guys are wearing watermelons on their heads. I thought, ‘these people are insane.'”Then I went to a game in Mosaic Stadium. I almost froze to death and everybody was cheering. I thought, ‘Yeah, this is something to do before you die, for sure.'”
Esrock has been travelling across Canada for more than two years collecting the country’s “amazing, world-quality experiences” for his book — The Great Canadian Bucket List: One-of-a-Kind Travel Experiences.Considered an authority on travel, Esrock has visited 109 countries and is a nationally published columnist, journalist and TV host. To make his list, Esrock said an experience has to be “unique to Canada” and fall into one or more of the book’s several categories, including adrenaline, nature, food, culture, history or quirky. It also has to be reasonably accessible.  “I didn’t want it to be fantastical. I didn’t want it to be shooting pucks with Sidney Crosby or flying to the moon,” he explained. “I wanted it to be things that everybody can actually do … some of the experiences are free, and some cost a fortune, but it’s kind of a range and there’s something there for everybody.”Esrock was visiting Moose Jaw on Thursday during a cross-country book tour to investigate the city’s Tunnels, known for their use by Chinese immigrants and alleged ties to Al Capone.  “The Tunnels of Moose Jaw cross off a number of the categories that I’m after,” Esrock said. “They’re unique. You can’t do this anywhere else in the world. It’s quirky, cultural, and historical.”The Tunnels are “something to see and do before you die,” Esrock said.  But to be branded his best experience, the Tunnels face tough competition.   Esrock has lengthy list of Canadian experiences, including a weekend of RCMP cadet training, a voyage on the “super rough seas” of Newfoundland, and a search for the Spirit Bear in British Columbia’s Great Bear Rainforest.   “Canada is sitting on a bounty of bucket list experiences,” he said. “These are things that you can do nowhere else and stuff that you will remember for the rest of your life.”  The ultimate goal is to encourage Canadians to explore more of what their own country has to offer.”Canadians are very warm, very hospitable and very proud of where they come from, and yet at the same time I say, ‘Canadians are quite arrogant in their modesty,'” Esrock said. “They don’t realize just quite how good an experience they have in their own backyard.”But what’s really spectacular about Canada, he added, are its stories and people.  “Everywhere we’ve gone, we’ve met people who have given us a bigger insight into Canada,” said Esrock. “What’s really interesting is the stories. I believe that stories inspire us. And so each of the chapters (in The Great Canadian Bucket List) … is there to inspire (the reader).”