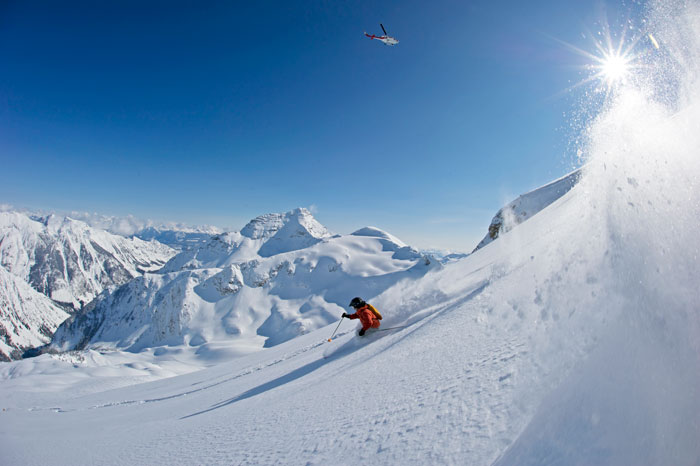 Welcome to a place where a person’s worth is measured in vertical feet. It is surrounded by mountains, waist-high powder, and the whomp-whomp sound of a helicopter. Heli-skiing has been on my Bucket List since I discovered how much fun it is to strap on a plank of polyethylene and launch oneself off a mountain. Having gone through the meat grinder of learning to snowboard, the idea of being dropped off at the top of the world to float over virgin snow seems a just reward. Thus I found myself at the Canadian Mountain Holiday’s Kootenay Lodge in Nakusp, amongst a group of Americans on a Mancation, folks proudly addicted to the “other” white powder. How else to explain the guy celebrating his 6th million vertical feet with CMH? Or the sole Canadian who has visited every one of CMH’s 11 heli-skiing lodges? Using a helicopter as a makeshift ski-chair is not cheap, with trips costing north of $6000. “My wife goes on cruises, I go to the mountains,” explains Mike. One guy has flown in from London England for 4 days of powder. That’s if the weather plays ball.

It’s late February, and the avalanche risk is high. The snow is plentiful, but conditions mean “we only have an area about eight times the size of Whistler available to us, as opposed to one hundred times” explains affable mountain guide Rob. We watch a safety video, which pretty much explains all the ways heli-skiing can kill you: avalanches, tree wells, decapitation by skis. We practice avalanche drills and rescue, get fitted with receivers, radios and shovels, and finally head to the Bell chopper we will come to know so well. Here, I see grown adults behave like little kids, clapping their hands with glee. Wind, visibility and terrain dictate where the helicopter can land, but it appears to be able to gently settle on anything. We exit, the chopper taking off right over our heads, and the Selkirk range surrounds us in blue-sky mountain glory. I strap in, barely containing my excitement, and proceed to have the worst run of my life. Powder, I discover, is not a groomed ski-hill. Heli-skiing and riding requires new techniques, new muscles and instincts. My group of heli-veterans patiently pull me out of tree wells, traverses and snow burials. Every muscle is burning as I battle my physical demons, determined to master the challenge. This is why you don’t go heli-skiing for one day. Besides bad weather that can ground you for days, you’ll need several days to enjoy the diversity of runs, snow and progress in your ability. We ski runs called Drambue and Cognac, In Too Deep, Lobster Claw and my favourite, Little Leary. I had expected just a few rides in the helicopter, but we average about ten flights a day, the pilot somehow landing the copter just a few feet from our heads for the return flight to the top of the mountain. Like the skiing itself, it’s a thrill that doesn’t get tired.

We whoop and bird-call through the forest, making sure nobody is lost, over fresh powder that stretches on in every direction. By Day Three, I’ve found my groove. Early morning stretching classes (and fabulous food) at the lodge help the muscle woes, and now I’m carving in deep pow, slaloming pine and hemlock trees. “That was the best run so far,” says the guy from England, after just about every run. I’m taken with the routine of each day: wake up, stretch, eat, ski, soak in natural hot springs, drink beer, eat dinner, retire early. No wonder these guys keep coming back, and work so hard to be able to afford to do so. Atop a mountain on the final day, crystals glittering in the air as the sound of skis click into their bindings, I soak in a post-adrenalin, post-exhaustion sense of achievement high. It’s been a once-in-a-lifetime week of sport, companionship, and natural beauty. A highlight on the Great Canadian Bucket List, and my first 50,000 feet of CMH vertical. Strap in, there’s still a long way to go.