Hallucinating with the Northern Lights 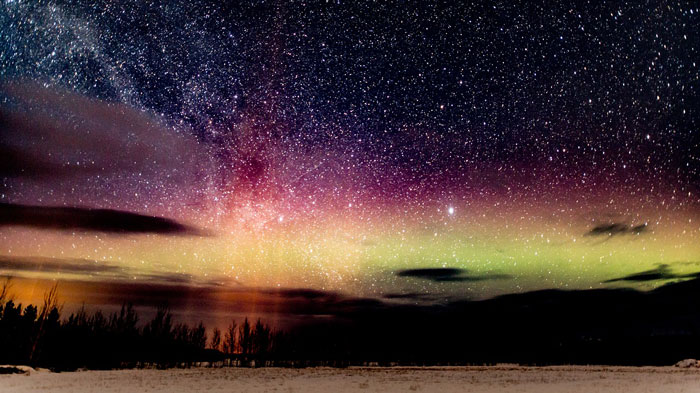 There is a planet-sized hole in my Bucket List. I may have travelled to over 100 countries chasing my dreams, but I’ve yet to see the Northern Lights. Not that I haven’t tried. There have been many previous attempts, hopeful yet disappointing weeks spent in Alaska, Yukon, northern Saskatchewan and Iceland.
Here’s my conclusion: when you live in cold, sparsely populated northern climates surrounded by unimaginable amounts of space, your mind begins to untangle. Brain unwinding, your frontal lobe fires relaxing neurons to the back of your eyeballs, resulting in beautiful hallucinations that can best be described as “lights dancing across the sky.”

When you arrive from out of town with the hope of experiencing such a phenomenon, here’s what you’ll hear:
1: “You should have been here last week, they were incredible!”
2. “You should be here next week, they’ll be incredible!“
Being here right now however results in clear skies with no dancing lights, alternating with foggy skies and no dancing lights, or rainy nights with twelve Japanese tourists looking glumly towards the sky. Here being Yellowknife, seated below the Aurora belt, and one of the best places to see this supposed mass-hallucination.

Adding to my misery was the fact that my Dad had flown up from Vancouver to join me, as viewing the aurora borealis has been the number one item on his Bucket List, ever since he saw an awful 80’s movie called St Elmo’s Fire. Oddly enough the film does not actually feature the aurora borealis, but does contain the light going out of Ally Sheedy’s acting career. Travelling across Canada to tick off the ultimate list of things to do before you die, I learned that Bucket Lists are matters of the heart, and so it’s best not to question.

A low, rainy cloud is consuming Yellowknife when we pass on Grant Beck’s offer to visit his Aurora Watching cabin. Grant is being wonderfully optimistic.
“Sometimes the clouds break, and we get a beautiful show!” he tells us. You can almost hear those nerves crackling behind his retinas. According to local lore, the mythical Northern Lights are the result of electrical storms caused by solar flares smashing into Earth’s magnetic field. In Yellowknife the lights can be seen at their most brilliant, attracting tourists from around the world in the hope that they too, will share this mass hallucination. Every local I meet is eager to share a story of the sky exploding in luminous shades of green, red and blue, “like, just last week, on the day before you arrived.”

The rain continues to fall, but it does not dampen the spirits of Carlos Gonzalez at Yellowknife Outdoor Adventures. We’d just spent the day fishing on Great Slave, and Carlos has seen the skies part like the Red Sea before. Just, not tonight. The weather forecast is looking fantastic however, on the day after we leave. 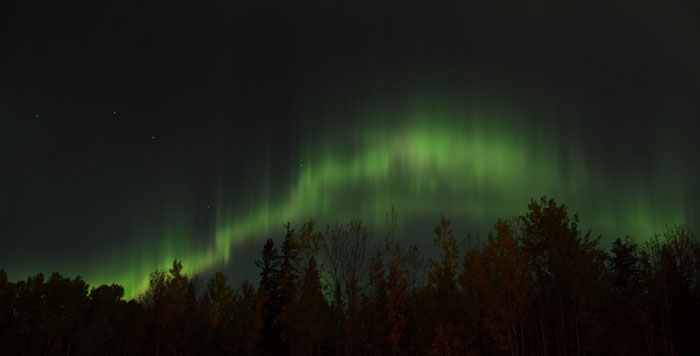 Thanks to a short flight with Buffalo Air (another Bucket List item ticked off), we are now in Hay River. It’s cloudy, of course, which makes for poor (that is, impossible) aurora viewing. Before retiring for the night in the Ptarmigan Inn, we ask the friendly receptionist, half-jokingly, to call us if he notices a natural fireworks display in the sky. Imagine, then, our reactions when the hotel phone wakes us up shortly after midnight with exciting news! The sky, would you believe, is now absolutely clear, but there are no lights in them. Seriously, guy?

At 2 am, the phone rings again. This time, the receptionist says there are lights in the sky. My Dad is at the door before I open my eyes. I find him in the parking lot, looking somewhat perplexed, repeatedly asking: “where, where, where?”
I point his attention to the fact that we’re standing under a rather bright streetlight. We walk a couple blocks to the river where there’s less light pollution, and sure enough, a huge green band is glowing in the sky. To our right, spectacular bolts of lightning are firing on the horizon. To the left, a bright, half-crescent yellow moon bobs in the purple sky. There’s a glow beneath the skies too, on the face of my Dad, realizing his dreams at last, and on my Bucket List, which has constantly reminded me that any experience is only as special as the people you’re experiencing it with. It wasn’t the fireworks we expected in our imaginations, but it would do. My Dad puts his arm around me, a huge smile on his face. “Will you look at that!” he says in amazement. Yep, I can see it clearly. We’ve officially spent too much time in the north, and we’re starting to hallucinate too.