Getting Screeched in Newfoundland 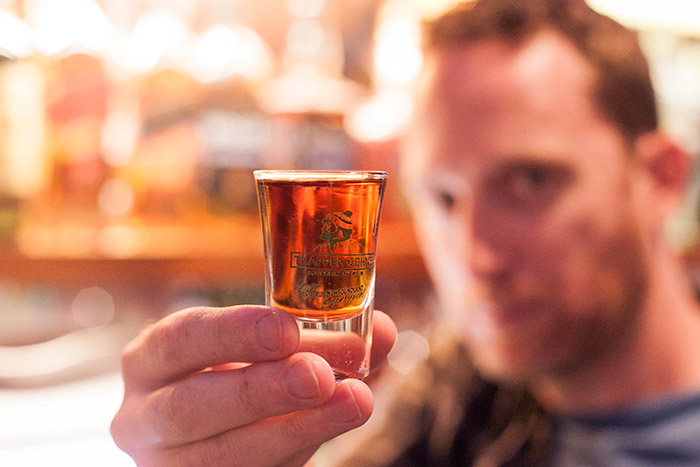 When Newfoundlanders heard I would be visiting the province for the first time, they didn’t ask me if I would explore Gros Morne, or track icebergs. They asked me if I would be getting screeched in. The fact that this tradition is born out of the St John’s bars on George Street, ready to charge you $12 bucks for the ceremony and certificate, is beside the point. To become an honorary Newfoundlander (not a Newfie, for that term is derogatory, unless you’re a Newfie, in which case it’s not), one must get screeched in.

Shortly after my arrival in St John’s, I am at Trapper John’s just in time for the barkeep to begin the ceremony. Christian’s, another bar in a city that likes its possessive apostrophes, apparently has a more authentic ritual, but they don’t do it on Mondays, and it is Monday night. And so I enter a mostly empty Trapper John’s, where a couple from the UK and a student’s mom are signed up for the evening’s Screeching. To get screeched in, one must listen to the barkeep’s pomp, drink a shot of screech, and then kiss a cod on the mouth, or in the case of Trapper John’s, the behind of a fluffy toy puffin. The screech in question is a type of cheap rum that hearkens back to days of lore when the same barrel might carry rum and molasses. The sediment that remained would be fermented and mixed with grain alcohol, to create a drink that might blind a telescope. Screech was a term used for any moonshine, but is now marketed as rum, consumed with great pride by locals, and honorary locals for that matter.
It is so named because of the sound one makes after consuming it, or the sound in the flap of the sails on a boat, or whatever you’re told by the local who will claim to know these things.

We line up at the bar and the bartender begins his story, which I struggle to understand. It is my first real exposure to the distinctive Newfoundland accent, which rolls like an English barrel, made of Canadian wood down a Scottish hill. Something about the origins of the rum, aye aye this, ya ya that. We are then asked the following question: “Is ye an honorary Newfoundlander?” to which we must reply, with enthusiasm:
“Deed I is me ol’ cock, and long may your big jib draw!”
I shoot back the rum, expecting a harsh burn down my throat, and am relieved to find it absent. Back in my university days, I indulged in Stroh Rum, which was 80% alcohol, and could strip the innocence off a club of girl scouts. I’ve also had the misfortune to shoot straight absinthe in Denmark, raki in Albania, fermented horse milk in Mongolia, and 125-year-old moonshine with embalmed bug corpses Georgia. Screech by comparison, was palatable.

The toy puffin, representative of the province’s official bird, has seen many lips, which the bartender goes through great effort to remind us. This was pre-Covid of course, when one would willingly and enthusiastically lock lips with strangers in a bar, or the behind of a toy puffin. At this point, I tell the bartender about the far more intimidating Sour Toe Cocktail, which kinda punches a hole in his sails. He must hate travel writers. Still, I gamely kiss the butt of the fluffy puffin, receive a certificate, and that is that. A highlight of Newfoundland it was not, but at least I can tell Newfoundlanders that yes, I had been Screeched in. Over the years, I would get screeched in again at various locations across Newfoundland, because no harm ever became of it, other than bonding with locals and a mild hangover from the inevitable drinks that followed. Every province should have an honorary ritual for visitors. Undeniably, it makes you feel welcome.