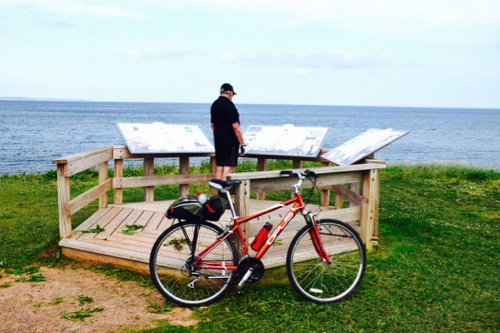 Bucket Lists love multi-day bicycle trips. Travelling with our five senses, we smell our surroundings, taste the wind, watch trails cut across rolling hills, listen to birdsong, and feel wonderful that we’re burning calories in the process. Yet, since I’m nowhere in the kind of shape I should be, the thought of a long bike trip is also physically daunting. How many times have I driven past a cyclist huffing up a big hill and thought: “I wouldn’t want to be that poor bastard!” I do enjoy cycling, downhill usually, joyrides mostly. A week on a saddle seems like a sore arse waiting to happen, but undeniably, something to experience before peddling off into the sky. If only there was somewhere mostly flat. Somewhere with remarkable beauty, friendly locals and delicious cuisine. Somewhere that will allow me to stay in charming B&B’s and inns, and have my bags shuttled ahead for me? Somewhere like Prince Edward Island.

Canada’s smallest province appears to have been designed for amateur cyclists like myself (and you hardcore folks as well). Besides its abundant bike lanes, PEI is blessed with a mostly flat trail that snakes from the west coast to the east, a 450km tip-to-tip marvel known as the Confederation Trail. Arteries branch to coastal communities, linking to paved bike lanes that skirt some of the most magnificent scenery in the country. Some of you might prefer to plan every step of the way yourself. I contacted outdoor specialists Great Canadian Trails, who make it as easy as coasting down a hill. Together with a highly knowledgeable and immensely likeable islander named George Larter, they offer the ultimate PEI cycle trip. All we have to do is show up. George picks us up from the airport, shuttling us over to the Outer Limit Bike Shop to pick up our rental bikes. If, like myself, you have no idea what a pannier is, don’t fret. These bike bags are straddled onto comfortable, upright hybrid bikes, which in turn are strapped onto George’s van to take us to our first stop. We showed up, now all we have to do is pedal. George will ensure our luggage is waiting at our next inn, always close to a cold Gahan wheat ale and that famous PEI seafood. Really, it’s as simple as riding a bike. 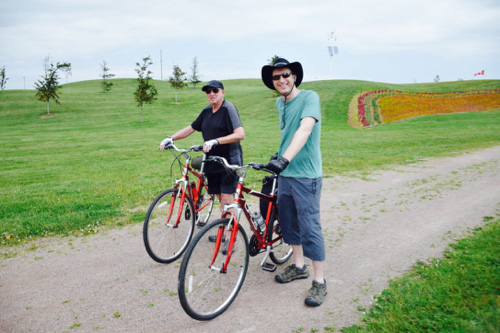 We start in the town of Borden-Carleton, in sight of the Confederation Bridge. Replacing a dug-up rail track, the well-maintained Confederation Trail is a car-width wide gravel strip cutting through dense forests, rural villages, and fertile farmland. It’s a hot summer day, and our handy itinerary is blessedly flexible. Since this is only Day 1, we’ll let enthusiasts tackle the extra 24km to Kensington, and instead leave the Trail after 18km for the lightly trafficked shouldered highway towards Stanley Bridge. Bright sunshine makes the countryside pop off our retina. We see manicured lawns bigger than football fields, sprawling fields of potatoes, lush meadows, and purple lupus cradling immaculate wooden houses. All the peacefulness and beauty of the gentle island floods those five senses. Arriving at the Stanley Bridge Resort, bags waiting for us in large air-conditioned rooms, we’re physically knackered, but not enough to deny ourselves the reward of a dozen fresh oysters at adjacent Carr’s Oyster Bar. Day 1 might be physical, but it is also a slow seduction into the island’s pace. Day 2 will clobber us over the head, grab us by the hair, and carry us back to the cave.

It’s called the Gulf Shore Parkway, and it is, without doubt, one of the world’s most beautiful bike rides. From Cavendish, we follow a paved bike path onto the beach, and ride east into Prince Edward Island National Park. Tracing the shoreline, the 50km-long Parkway takes us to tall sand dunes, windswept beaches, viewing decks, and PEI’s striking red coastline. With postcards around every bend, and more than enough time to explore them, we arrive in North Rustico elated. That Parkway is truly something special. Waiting for us at Fisherman’s Wharf is a lobster supper, a wooden boardwalk to bike off the all-you-can-eat dessert tray, and smiling George, ready to shuttle us along to Brackley Bay. We could ride there ourselves, but there’s no shoulder on the highway and too many hills. Lets save time and energy for the good stuff. 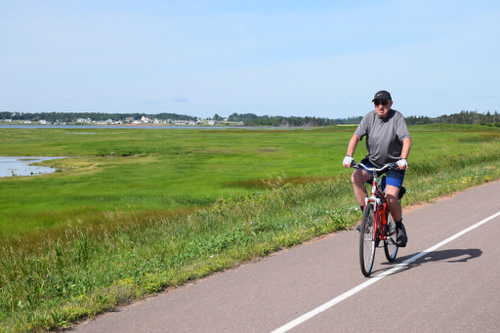 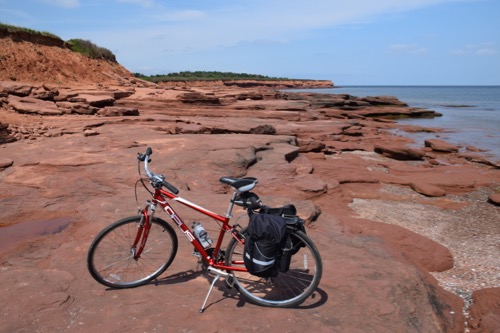 After a relaxing overnight cabin stay at Shaw’s (the oldest business on the island), we continue the following morning on the paved Parkway, hop onto some quiet local roads, and re-join the Confederation Trail en route to Mount Stewart. Awaiting us is offbeat accommodation above the homely Trailside Café. Each room has a vintage record player, and a choice selection of vinyl selected by owners Pat and Meghann Deighan, who also happen to own Charlottetown’s hippest record store.
“Everyone in PEI tells a good story and plays an instrument,” a friend once told me. We hear great stories and incredible music at the Café downstairs, which features local and touring musicians each summer weekend. The place is jammed, the staff as welcoming as good friends, which by the end of the night, they are.
Just steps from our antique bedframe, the bike path continues eastwards to St Peters, crossing pink-painted wooden bridges, peat bogs, bubbling streams, and hardwood forests. The 13km from Morrell to St Peters is considered among the most scenic sections of the entire Confederation Trail. Oyster and mussel beds now line the inlets. With our legs getting stronger, kilometres vanish increasingly quicker. That night, we’ll toast the moon as it lights the gazebo at the romantic St Peters Inn. Wine will flow. All of us from-aways – whether we’re travelling by car, motorbike or bicycle – recognize that a golden PEI summer is worthy of celebration. 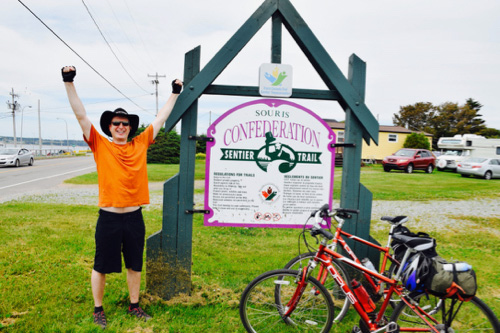 It’s all trail from St Peters to the coastal town of Souris, our final stop. A week ago, I’d never imagine myself biking 40km in a single morning, much less having the legs to continue if I wanted (the itinerary includes an optional 47km circle route to Basin Head Provincial Park). Adjacent to the historic McLean House Inn in Souris is a local eatery called the Blue Fin. We’ll reward ourselves with their surf & turf – an 8oz rib-eye steak and 1.5lbs lobster, all for less than $30.

It has been an unforgettable week relishing the beauty of Prince Edward Island – keeping healthy, making friends, and eating like royalty. Listening to the wind blowing in from the Gulf of St Lawrence, how could we not fall asleep with a smile on our faces? A one-of-a-kind experience for you experienced cyclists, and the rest of us too.